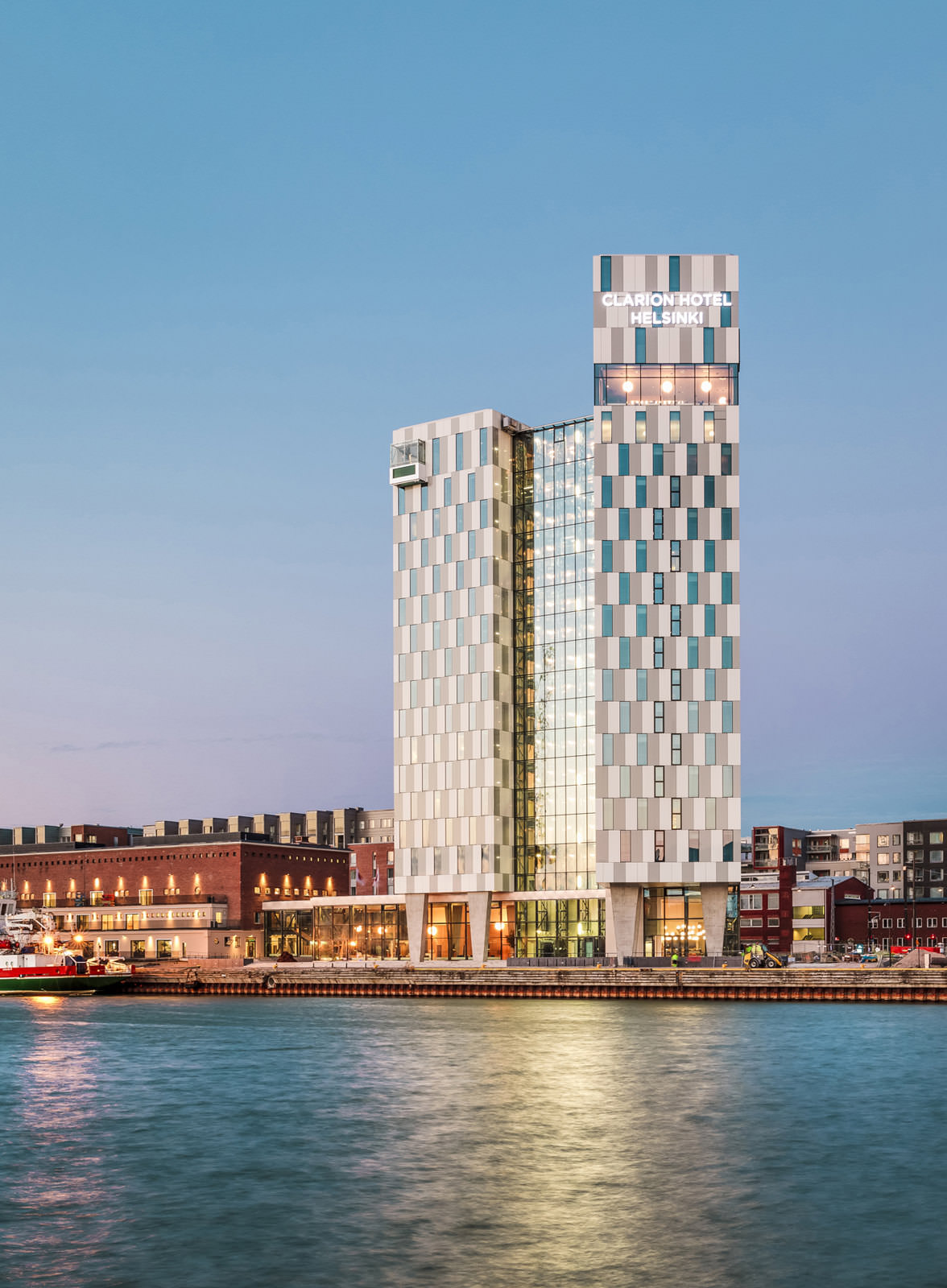 A Landmark Helsinki Hotel is Created when a Historic Warehouse is Paired with Sleek Towers.

The Clarion Hotel Helsinki tower acts as an accent in the city structure when entering the new construction harbour area of Jätkäsaari. The neighbouring warehouse building L2 (designer Lars Sonck 1935), is a good example of 1930s late-classical industrial architecture and is connected directly to the hotel lobby. The seven meter high lobby connects the 14 hotel floors to the event and congress centre of the old harbour magazine.

The hotel floors consist of 425 varying sized rooms with a sky bar, sauna, pool, and fitness area on top. The sky bar and the cantilevered glazed-end pool provides the guests with a spectacular view over the Baltic Sea, harbour, and the city of Helsinki. The ground floor also houses a café and bar with outdoor areas along the harbour bay.

Jätkäsaari is a newly created urban zone, extending Helsinki city further out into the west. A neighborhood dominated by the sea, Jätkäsaari is one the city’s fastest growing areas.

The intention and the client’s ambition were to build a landmark building at the edge of the newly converted Helsinki port area of Jätkäsaari, becoming Nordic Choice Hotels’ first hotel in Finland. The original hotel design presented to the city was a 32-storey sculptural mass to mark the entrance to the new area, acting as a bold visual point of reference in the cityscape.

As the project developed, the building volume was split into a combination of two towers with a total height of 16 floors according to the town plan developed by the City of Helsinki.

The brief asked for 425 varying sized rooms with a sky bar, sauna, pool, and fitness area on top. The functional concept included connecting the hotel to the L2 congress center in order to achieve synergy benefits with mutually supporting functions.

The projects implementation team stretched across Europe, with the main contractor, Hent, coming from Norway. This led to a lot of architectural design time being spent on coordination, as well as adhering to and complying with local regulations. In addition to the multinational nature of the project, we solved specific technical issues unique to a building of this height that required specialist construction expertise.

The coordination encapsulated different building and design practices across Finland, the Baltics, the Mediterranean and Austria and Germany. In collaboration with an international team, key design topics explored in this project involved the knitting together of the main structural design from Norway with concrete elements and steel structures from Lithuania.

In addition to this, building components was shipped on site from Greece, Italy, Austria, Germany, and Lithuania. The facades and composite aluminium came from Greece; the bathroom elements, hotel room furniture, and lighting came from Italy; the swimming pool with structures from Austria, the Schüco facade system from Germany; and finally, additional façade and concrete elements came from Lithuania.

During the design process we solved key issues through bringing consistency to building practices and part-production processes, marrying Finnish construction methods and design practice with international ones, harmonizing varied contract practices, as well as managing cultural differences and varied perceptions of responsibilities.

Clarion is a successful example of the increased internationalization of construction, with European construction being increasingly handled with agile sub-production methods.

The Clarion Hotel Helsinki towers act as accents in the city structure when entering the new urban harbor area of Jätkäsaari. Together with the old magazine building L2, the buildings form a new recognizable part of a cityscape that was previously characterized by industrial and port activities. In the city quarter, both new and old architecture meet in a complementary and contrasting dialogue.

The two hotel towers (78 and 68,5 meters high respectively) dominate the skyline, while at the same time providing continuity with the surrounding cityscape. The higher of the two towers is angled as a continuation of one the city’s main arteries, Bulevardi, whereas the lower tower is angled with the Hietalahti Square-side Jätkäsaari blocks.

The facades of the towers are not illuminated; they change character in accordance with daylight. High windows and aluminium panels lend the facade a subtle relief-like surface.

Playing with different heights and textures, Clarion Hotel Helsinki is a landmark that seamlessly flows with Helsinki’s existing cityscape.

The sky bar and the cantilevered glazed-end pool provides the guests with a spectacular view over the Baltic Sea, harbor, and the city of Helsinki. The ground floor also houses a café and bar with outdoor areas along the harbor bay.

In the foyer space, the exposed cast in-situ concrete pillars are a reference to both the industrial history of the port, as well as the rough interior surfaces in the L2 warehouse.

When it comes to integrating the warehouse, a balance was struck between preservation and adaptive reuse, mixing the careful re-use of space with the creation of new public areas for people.